February 23, 2020 at 2:03 pm, No comments
Teaming up with BC Race Cars at the fast and challenging Canadian Tire Motorsport Park, 24-year old Nathan Blok returned to the track for the his one and only time this year.  Wheeling a 2018 Chevrolet Camaro in the GT1 Class in the GT Sprint Championship, Blok brought home three pole positions, three 1st place finishes and the fastest lap of the weekend at the Celebration of Motorsports Weekend on September 29 -30, 2018.
Despite not being able to race this year due to a non-racing related double wrist fracture this past May, and this being the first time racing a 490 HP TransAm race car Blok was looking forward getting back behind the wheel.   Blok is no stranger to driving competitively in both closed and open-wheel cars having experience in a number of disciplines from Formula 1600 to Formula 2000, Touring cars and IMSA Prototype Lites. He is the 2015 Formula 2000 Canadian Champion and a two-time Formula Tour 1600 Series Champion.
Qualifying for the 48 entrants took place in the early morning on Saturday, in cool and sunny conditions.  After only 10 practice laps and 3 qualifying laps, Blok took pole by 0.255 seconds beating out #111 Terry Fletcher in a 800 HP Camaro in the T1 class.

RACE 1:  The 25 minute Race 1 ran under sunny conditions.  At the drop of the green Blok still getting familiar with the car added too much power creating wheel spin and allowing Fletcher to edge past him going into corner 1.  Blok stayed right on his bumper through to the hairpin at Moss corner, until Fletcher took advantage of his 300+HP difference and pulled away on him down the straight stretch.

Lap 2 saw a similar situation as despite Blok catching up to him by corner 5, Fletcher was again able to pull away on the straight.    At corner 3 on lap 3 Blok tried to pass Fletcher but was unable to make to stick.  Meanwhile #01 Anthony Polito in his T1 800 HP Ford Mustang was closing quickly and by the end of the Andretti straight going into corner 8 he had caught up to Blok.
Lap 4 they started to encounter lap cars.   At the hairpin Blok again was on the bumper of Fletcher with Polito right behind him, but Fletcher pulled away on the straight with Polito following suit and barrelled past Blok, moving him down to P3.
Blok was able to maintain close contact and on Lap 6 the top three cars bumper to bumper, came upon 3 lap cars bunched together.  Fletcher and Polito moved to the outside of the track while Blok moved to the inside.  Blok made it passed Polito and then while Fletcher moved to the left of the 1st lap car Blok continued to keep to the right, as they went 3 wide down the track.   The 2nd lap car kept to the left forcing Fletcher to move to the right, but Blok was already there and with the 3 cars side by side, Blok moved into the lead and continued to pass the 3rd lap car.
Blok continued to thread his way through lap traffic with Fletcher hot on his trail for the balance of the race, where he crossed the finish line in 1st place over all by 4.3 seconds and 1st in class by 31.5 seconds.

RACE 2:  Early Sunday morning the GT Sprint/Challenge cars returned to a green track for Race 2 after a steady rain the night before.  The race saw Blok starting on pole as the starting grid was based on Race 1 results.   This time when the green flag flew, Blok was ready and easily took the lead opening up a gap by the hairpin at Corner 5.  However by the end of the Andretti straight going into Corner 8 #111 Terry Fletcher and #601 Leigh Pettipas in his T1 800 HP Corvette were on Blok's bumper.

On Lap 2 Blok's dash lit up with warning lights as his power steering starting to fail.  Dealing with this continual distraction, it was not until Lap 7 when his power steering totally failed.     After Corner 2 on Lap 7  the trio come up to 5 lap cars, easily passing the 1st one on the right.   Going into Corner 3, Fletcher moved beside Blok as they came up to #43.  Fletcher went to the left, Blok to the right.   Blok having to slow due to another lap car directly infront of him allowed Fletcher to move ahead into the lead.   Coming out of the hairpin Blok made an attempt to re-take the lead but was unsuccessful.
Lap 9 Blok made another attempt at the hairpin, but again was unsuccessful.  On the inside of Corner 3 on Lap 10 Blok got beside Fletcher and they drag raced side by side to Corner 5, where Fletcher was slightly ahead.   A lap car in the center of the track on Corner 5 forced Fletcher to go to the outside allowing Nathan to move to the inside and re-take the lead.
On Lap 13 on Corner 10 heading to the start-finish line Fletcher moved to the inside and again took over P1, where he stayed until  Lap 16 on Corner 5 where he got a little loose coming out of the corner.  This allowed Blok to take advantage on the inside and recover the lead.  He then started to pull away taking the checkered flag for 2nd time of the weekend by 1.3 seconds overall and by 41.9 seconds in class.
With the threat of showers on the horizon, the BC Race Car team work vigorously over the next 2-1/2 hours trying to repair the defective power steering pump for Race 3 to no avail.

By Lap 4 Fletcher had moved from 4th up to 2nd place and by Lap 7 had gained enough on Blok to make a pass on the inside of Corner 8 taking the lead from Blok.  On Lap 8 Corner 5 saw Blok attempting to re-take the lead first on the outside of 5a and then on the inside of 5b but was unable to make it stick.

Fletcher and Blok sped bumper to bumper past the start/finish line overtaking a lap car on Corner 2.   Blok moved to the inside of Corner 3 as Fletcher went wide and ran off the track.  Making his way back on to the track Fletcher takes up the chase after Blok but unfortunately by Corner 8 of Lap 10 he went off the track again, this time hitting the wall and ending his race.

Blok continued on wrestling with the power steering until Lap 15 when he took the checkered flag 17.9 seconds ahead of 2nd place overall and 54 seconds ahead in class for his 3rd win of the weekend.

This made for a perfect weekend:   3 pole positions, 3 first place finishes and fastest lap of the weekend!

“I've driven many challenging races in my career, but Sunday's finale was easily the most physically challenging I have ever done.  Terry (Fletcher) and I raced each other very hard and very clean all weekend and having the pressure behind me for the entire last race made my difficult task harder than it already was.  I owe a big thanks to Blaise Csida and the BC Race Cars team.  They gave me an excellent handling car, worked to fix the power steering pump right up until that last possible moment.  I owe a big thank you to my sponsors who stepped at the last moment to ensure a successful weekend: Woodys MVR, Certified Labs, SunSign Graphics, Belder Tool, H&H Construction, McMillans Transmission, TD Products and auctionacar.ca. 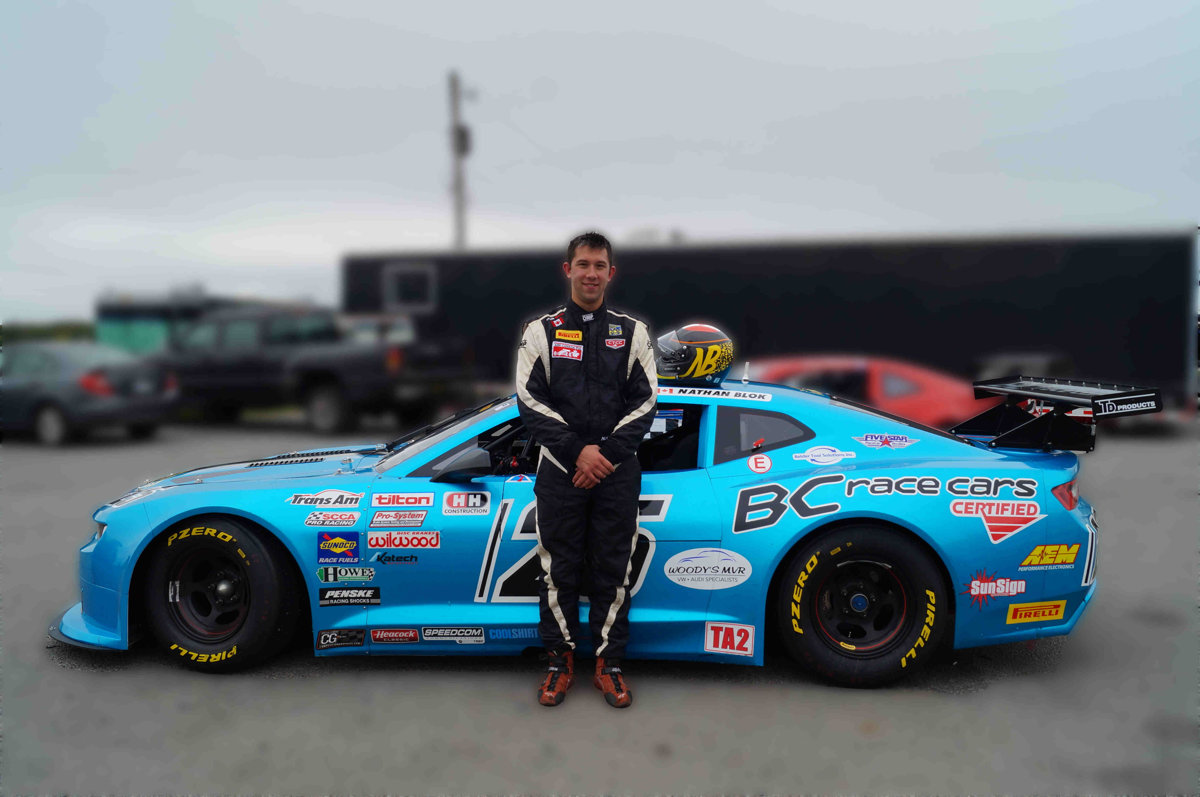