February 23, 2020 at 10:44 am, No comments
Nathan Blok on the podium twice on first double race weekend
MAY 2015 - BEACHBURG ON – Nathan Blok returned to the track in 2015 with an impressive double pole position and double podium finishes on the first, double race weekend of the re-vitalized Canadian Formula 2000 Championship Series, which is returning after a 20-year absence in the Canadian Marketplace.
Taking place at Canadian Tire Motorsport Park on May 2 & 3, 2015, this is the first time Blok has raced at this track near Toronto ON. He has only had one day of testing since he last sat in a USF2000 race car in May 2014 at Indianapolis Motor Speedway and in July at the Toronto Indy where he finished 7th out of 24 drivers.
The weekend began on Friday when Blok, despite not being familiar with the track, finished the day with the fastest lap time. Saturday’s qualifying heat was even better as Blok won the POLE position with a lap time of 1:20.763, breaking Claude Bourbonnais’ track record. Only 0.38 seconds were separating the top 3 competitors for the final heat of Race 1.
Conditions for Race1 on Saturday were dry and sunny but with brisk winds and cool temperatures, which have a direct effect on the handling of winged, open wheel cars.
Blok started from his pole position with Chase Pelletier and Zach Robichon in hot pursuit. The three leaders were nose-to-tail by the end of the first lap with the pressure being applied to Blok. This trio battled amongst themselves with Pelletier eventually getting by for the lead.
At the race mid-point, Blok had Pelletier within his reach and lapped traffic becoming an issue. Blok and Pelletier traded the lead using the slower cars against each other but it was Blok who took the lead for good on the final lap for the victory.
“ A large portion of the race was how to manage the traffic quickly and staying ahead of the other drivers chasing me.  The race pace was very fast and it ultimately came down to who made the fewest mistakes combined with who caught the least traffic at the right time.  My car performed incredible all race and I was pleased to give Britain West Motorsports their first win of the season.”
On Sunday the F2000 cars returned under sunny skies and warmer temperatures to do battle once again in Round 2 of the weekend. Blok took his second pole position with a time of 1:20.528, another 0.235 seconds faster than Saturday. Just 0.088 of a second was separating Blok and Pelletier with Robichon 0.81 seconds in behind in third spot on the starting grid.
The green flag was waved off on the first circuit shortening the race by one lap. When the flag dropped on the second try, Blok wasted no time taking the lead and the top three cars began to pull away from the field. With the race half over, the three leaders again encountered lapped cars, one forcing Blok to take a wide line entering Corner 2. Pelletier took advantage of this obstacle and took the lead from Blok.
Not one to give up, Blok stayed on the tail of Pelletier and passed him while going through Corner 8 two-wide just a couple of laps later. More encounters with traffic impeded Blok in his race through the final five laps to the finish and ultimately he could not pass by all the slower drivers without losing precious time.
Robichon took the advantage went to the inside of Corner 1 with Pelletier following, both having more momentum, dropping Blok down to 3rd place. The lead cars ran nose to tail for the rest of the race and there were no more laps left for Blok to recover the lead.  All 3 cars crossed the finish line together, with only 0.5 seconds between 1st and 3rd place. Pelletier had fastest lap of the race with 1:21.246 with Blok clocking a 1:21.276 and Robichon a 1:21.382
“Again it was another real close fight between the 3 of us, with lap traffic being a factor.  Although the lap traffic was not as big a factor as it was on Saturday's race it still did affect the outcome.  This time I got the worst end of it.  The top 3 drivers are so close and I am really excited to have such a high level of competition and respect.  I am really looking forward to racing at Calabogie on May 30/31 weekend.  Being close to home I hope to put on an equally as good a performance for my local sponsors, family and friends.”
Blok’s next race weekend is May 30/31 at Calabogie Motorsports Park. 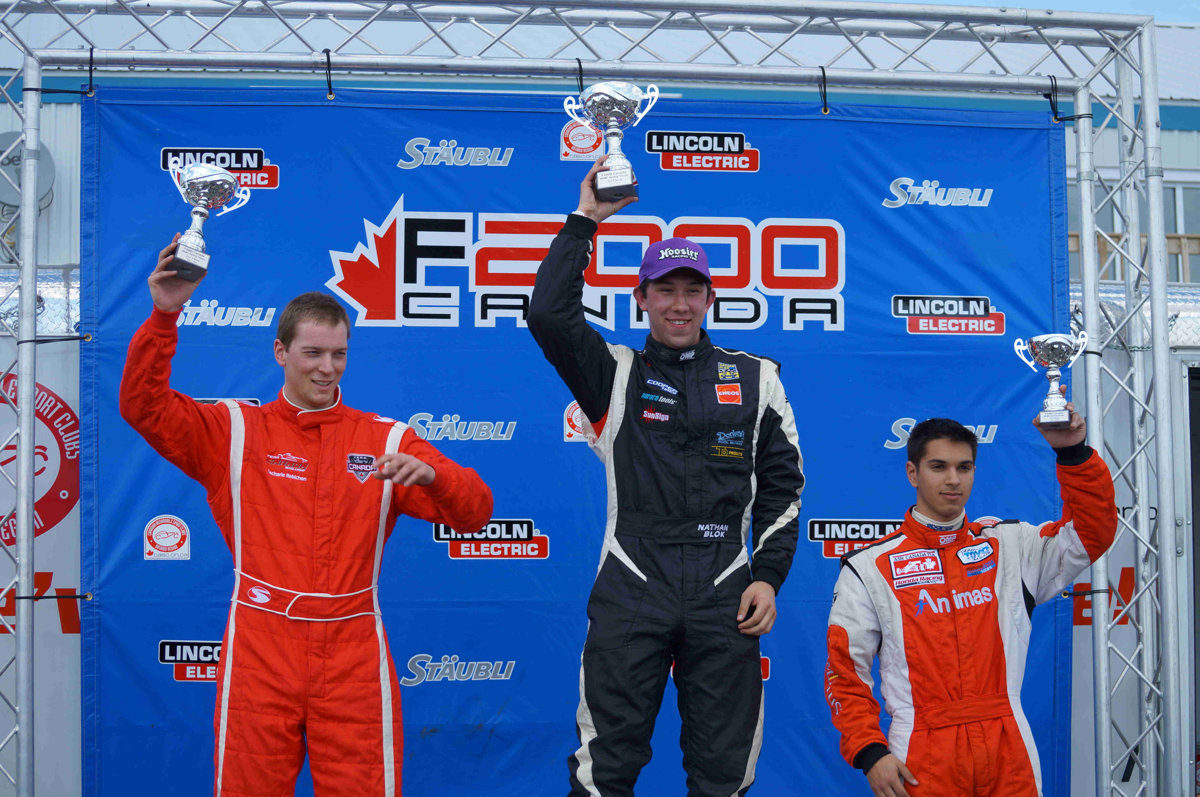