February 23, 2020 at 10:26 am, No comments
Nathan Blok considers the Toronto Indy his home race even though the 20-year old hails from a small town on the Ottawa River, there is certainly a special pride in doing well at a prestigious event before your sponsors and Blok did them proud with a top 10 finish on Sunday.
This was Blok’s first opportunity to race in Toronto and his second weekend driving in the very competitive USF2000 Series where the top 18 drivers in the 23-car field were separated by less than 2 seconds. Blok did manage to get one day of testing with his John Cummiskey Team at Toronto Motorsport Park in Cayuga ON prior to the Toronto Indy event. The weekend would consist of Rounds 8 and 9 of the 2014 USF2000 season.
Friday’s schedule brought two practice sessions and the qualifying heat. For the first practice, Blok familiarized himself to the challenging 1.755-Mile, 11-turn street circuit that is lined with unforgiving concrete walls. In the second practice, Blok increased his speed and was timed at just 1.3 seconds off the pace of the leader, placing him at 14th overall. The qualifying session took place late in the day and Blok was in the top 10 until the last 4-5 laps when the car developed an electrical problem. Although Blok improved his time by 0.7 of a second from practice, he ended up qualifying 15th on the grid for Saturday’s scheduled race.
Mother Nature became involved on Saturday bringing torrential rain to the city and forcing the cancellation of Saturday’s schedule for the Indy cars and the USF2000 Series. Now Blok faced the ordeal of racing in two final heats in one day on a track washed clean of all rubber laid down on Friday.
The rain continued overnight into Sunday so that although it was not actively raining for the start of the USF2000 Round 8 final, the track was very wet and slowly dried during the race. Blok started on the 7th row in 15th position and almost immediately two cars, No. 44 and 21, collided in front of Blok as he entered Corner 1. Blok was undamaged and able to get around these two but in the process he was passed by 4 cars putting him back 2 positions. Prior to the full-course yellow flag due to the incident, Blok was able to take back one of the positions,  putting him in 16th.
After the three laps under yellow, preventing any passing, Blok persevered and steadily moved up the field finally finishing in 12th place.
“The start didn't go as I had hoped, and the cars blocking the track from the accident didn't help my situation, since I lost some spots, said Blok. “After the restart, I felt I had the pace to catch the group ahead, but it was difficult getting passed #13 (Juan Maldonado). Once I got past him, I didn't have enough time to catch the group ahead.”.

Sunday dawn bright and dry and the USF2000 took to the track for the Round 9 final just after noon. Qualifying positions were based on the 2nd fastest time from qualifying, putting Nathan Blok 16th on the grid. At the drop of the green flag, Blok moved to the outside and passed 3 cars by Corner 1 moving him to 13th position.

There was contact in corner 1 between No. 96 and 24, taking them out of the race and moving Blok into 11th place. Before the full course caution came out, Blok passed another car at the end of the straight to bring him to 10th place.
For the next 10 laps it was a steady battle for Blok as he would gain a position, then lose a position . Not giving up at the mid-point of the race, Blok took advantage of a 3-car incident on Lap 16 and jumped up the leaderboard to 7th place. After two more laps under caution, Blok made several passing attempts but was unable to make them stick during the final two laps. The checkered flag dropped with Blok in 7th place, his first top 10 finish in USF2000 and the best result ever for the John Cummiskey Racing Team.
“I reviewed the Race #1 video and data, and went out on the track for Race # 2 on a mission,” laughed Blok.  “I made a huge advancement on corner 1 and by the end of lap 1 I had moved up 6 positions.   My car developed under-steer about 1/2 way through the race, and I made a sway bar change, but it was too little, too late.  A few more laps and a top 5 finish would have been in the cards.”
“I would like to thank all my sponsors for giving me the opportunity to participate this weekend.
And I would like to thank the team for overcoming some technical issues this weekend and providing me with an awesome car.  I'm proud to be part of John Cummiskey Racing's first top 10 finish and am looking forward to a full season next year.” 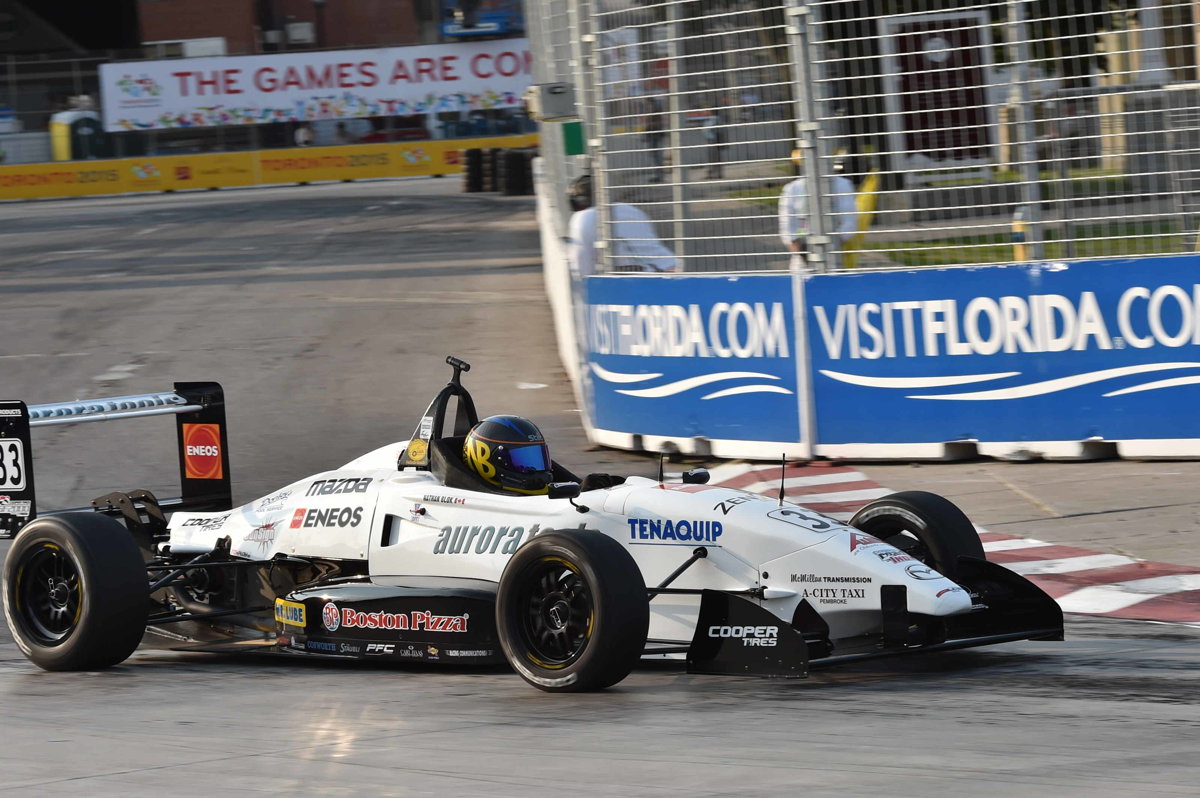